This laptop also features a desktop-inspired Keyboard, an intelligent cooling system, a powerful battery, an impressive audio system, lots of peripheral ports for interface connection and a fast wireless features. 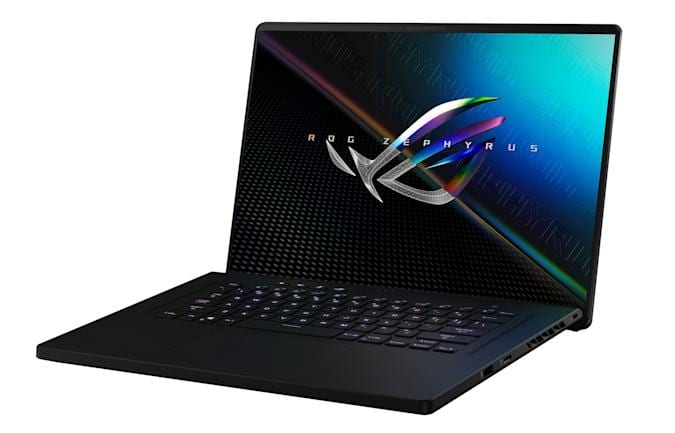 The ASUS ROG Zephyrus M16 features a similar built as the ROG Zephyrus G15 with only a small differences in IO positioning. It has a sleek and elegant finishing with a precision cut metal lid.

ROG Zephyrus M16 body is made of impressive fingerprint-resistant magnesium-aluminum alloy. The lid has a vertical line starting from the edge of the right hinge to the top corner on your left. There is also an illuminating Asus ROG logo at the right space.

When opened, the lid house the 16-inch display which is surrounded by very slim 4.6mm bezels on the top, right and left, but a bit thicker bezel at the bottom.

The hinge also raises the keyboard slightly upwards to an angle for a better typing experience. It also allowing you to rotate the screen flat 180 degrees, hence you can operate your laptop in stand position.

Furthermore, ASUS ROG Zephyrus M16 has a backlit kayboard at the base with numpad and quick functional keys. There is also a smooth, plastic touchpad at the base with enough palm-rest for easy gaming and typing experience.

The ASUS ROG Zephyrus M16 is a 16-inch laptop with WQHD display built on a IPS-level panel. This display also offers a resolution of 2560 x 1600 pixel and measures 94% screen to body ratio.

It also comes with 100% sRGB, hence, offering vibrant colors, and brightness to make up for an excellent display for gamer, and other users.

These display panel has Dolby Vision support and brightens up to 500 nits so as to offer  rich, and detailed visuals.

Asus ROG Zephyrus M16 delivers a next-level performance, with its latest Intel 11th Gen processors and NVIDIA graphics. This CPU is built on the 10-nanometre SuperFin process, and offers up to 12 per cent improvement, as well as 19 per cent improved multi-threaded performance over its 10th generation Comet Lake predecessors.

The standard model comes with the the Core i9-11980HK an eight-core CPU that can reach up to 5GHz across two cores with Intel’s Turbo Boost 3.0 technology. It’s also capable of reaching 4.5GHz across all of its cores, which should be useful for demanding multithreaded applications like video editing and 3D rendering.

There are models with the base CPU like core i7 and i5. All these laptops offers the best performance for any gaming experience.

In addition, Asus ROG Zephyrus M16 offers up to 48GB RAM and equipped with a PCIe Gen 4 SSD storage which offers up to 2TB.

Above all, this gaming laptop run on window 10 operating system, hence, offering a user friendly experience.

Similarly to Zephyrus G15, this laptop is equipped with 2 channels of 2W tweeter, with another 4 channels 2W woofer speakers.

This audio system is amplified with Smart AMP technology that delivers louder sound with no distortion and finely tuned software to give you sound like no other laptop. It also has built-in array microphones for incredible sound.

In addition, Asus ROG Zephyrus M16 is powered by a 4-cell Rechargeable Li-Polymer 90Wh battery, which offers up to 12 hours on light usage, minimal brightness, and other factors. It also comes with a 240W Power Adaptor which offers fast charging for the system.

This ASUS laptop also comes with the Integrated Wi-Fi 6 802.11ac (2×2) which is 12x faster than 802.11b/g/n and Bluetooth 5.0 for fast and reliable connectivity, both promises seamless connectivity.

For connectivity options, there are two USB-C ports with power delivery, one of which will also support Thunderbolt 4, two USB 3.2 Gen 2 Type-A ports, a microSD card reader, an HDMI 2.0b output, a full-sized Ethernet port with 3.5mm headphone and microphone jack.

The Asus ROG Zephyrus M16 price starts at $970. However, the price increases based on the configuration of your preferred model.

It is available for purchase on ASUS’s official store and other third-party e-commerce platforms like Amazon.

Here are a few specs of the ASUS ROG Zephyrus M16: