This increasing adoption and potential of the cryptocurrency is one of the reasons why Blockstale built its Bitcoin Teller Machines (BTM) specifically tailored for Africa. Unlike their Automated Teller Machine (ATM) counterparts, BTMs do not accept cards whether they are debit, credit, master, or visa cards.

The CBN has made it clear that cryptocurrencies are not recognized or backed by the financial authorities in Nigeria. It is therefore not certain how Blockstale intends to organise its financial operations especially since it deals with such an ‘outlawed’ currency.

NaijaTechnews.com spoke to the CEO of BlockStale, Daniel Adekunle on what the future of the BTMs look like in Nigeria.

Responding on how Blockstale was navigating the regulatory landmines, Adekunle said, “CBN does not see cryptocurrencies as a legal tender but it is said to be a commodity. That literally means there isn’t a law that governs crypto operations yet so trading is at people’s own risk.”

He further said that Blockstale had taken it upon itself to develop a user-friendly, secure and advanced device that guarantees trust and transparency in every operation.

“Meanwhile, the devices (BTMs) are built with special consideration given to the concerns of the CBN. We are neither a bank nor a financial inclusion organization, we are operators and vendors and our machines do not accept bank cards, only fiats (Naira).

We hope that this innovative move can yield proper regulations or framework if need be.

How do the Bitcoin Teller Machines work?

The Bitcoin Teller Machines can be used to buy and sell bitcoin. According to Adekunle, only bitcoin can currently be traded, other Altcoins like Ethereum cannot be traded on the BTM.

Anyone with a bitcoin wallet can walk to the nearest BTM, select buy Bitcoin and click the amount to buy. The person has to scan his or her Bitcoin wallet (from the phone) on the machine and then put the cash notes equivalent of the intended Bitcoin purchase in the slot.

After the cash notes have been checked and confirmed, the purchase is authorized and BTC is sent to the scanned wallet. To ensure the security of the user, a procedure called Know Your Customer (KYC) is carried out.

Depending on how large or how small the transaction volume is, basic or indepth KYC will be carried out. If the person is buying BTC wiith cash value below $100, the BTM will conduct just the basic KYC.

To sell Bitcoin using the BTM, the person selects Sell Bitcoin on the machine and types the amount (naira value) of the BTC he or she wants to sell. The BTM prints out some QR-coded instructions, transfers the BTC and waits for a 3-confirmation sequence.

After all has been said and done, the person clicks on the  Redeem button, and scans the last QR code on paper, after which the BTM dispenses cash.

How do the BTMs Reach more locations?

People can use BTMs in parts of Lagos only. Currently there is a BTM in Ajah, and according to Adekunle, more will be coming to SPAR Lekki, Eko Hotel and Suites in Victoria, Ikeja City Mall and Leisure Mall in Surulere during this first quarter of 2020.

Security is one of the major concerns in installing BTMs across the country. Responding on how Blockstale was ensuring the security of the BTMs, Adekunle said that there are tracking devices, cameras and alarms systems which have been built into the Bitcoin Teller Machines.

“This (security) was my very first concern and part of the reasons I built these machines from scratch, because of the components we have in the machines. We added trackers, door alarm system, and camera so as to contain the issue of security to a level. We are still working on more components but as it is, these machines can work anywhere in Nigeria and Africa so long there is power and internet facilities.

In an interview with Weetracker, Adekunle shared that the cost of setting up a BTM is between N5 million and N6 million. Blockstale, however has multiple partnering options for organizations that would like to host a BTM.

A Bitcoin ATM is a kiosk that allows a person to purchase Bitcoin by using cash or debit card. Some Bitcoin ATMs offer bi-directional functionality enabling both the purchase of Bitcoin as well as the sale of Bitcoin for cash according to Wikipedia.

Today history has been made First Bitcoin ATM In Nigeria, This is indeed a great innovation, let’s celebrate our own.  The launching of the #FirstBitcoinATMIn9ja is here and Adekunle Daniel

(@blockstale_btm) is the one in charge. Guys let’s support this technological movement in Digital currency and it is the way forward. 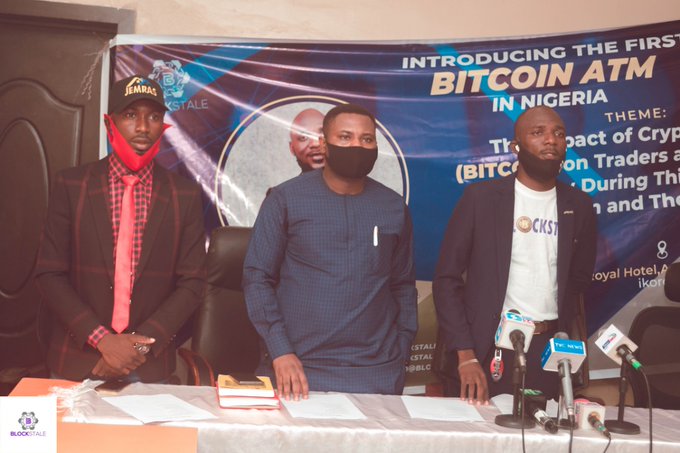 Let’s celebrate this young millionaire Adekunle Daniel the brain behind the First Bitcoin ATM In Nigeria.
The young entrepreneur designed the first Bitcoin Teller Machine firm in the country that is pivoting the technology to enhance businesses in Nigeria. He designed the machine in Shenzhen, China, and flew it to Lagos, Nigeria’s commercial centre.
With the increasing adoption and potential to make wealth from the crypto market, some entrepreneurs are taking advantage of the opportunities. One of such entrepreneurs is Daniel Adekunle, chief executive officer of Blockstale – a bitcoin teller machine. #FirstBitcoinATMIn9ja

Recently, TechNext spoke to the CEO of

If you are a bitcoin owner, it is only fair to congratulate you on the recent upsurge in the price of bitcoin.Despite the negative stance of most of the world’s authorities against bitcoin and other cryptocurrencies, the number of people that now buy and sell bitcoin and use it for transactions keeps increasing worldwide.