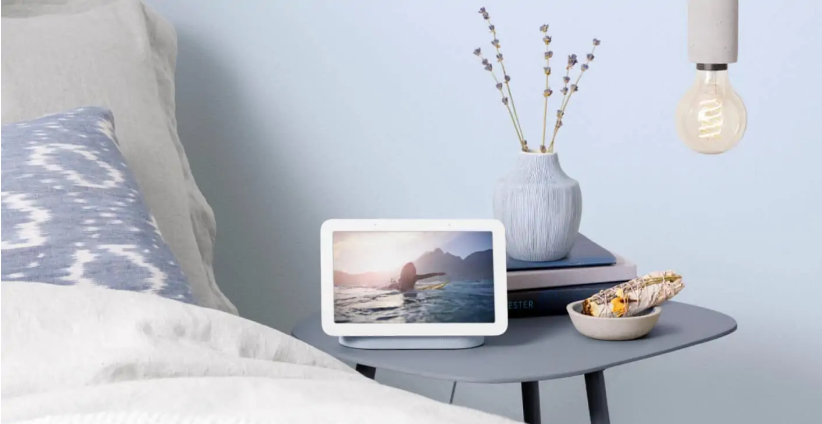 These days, smart displays are becoming more popular than actual smart speakers. This is because you can do a lot more with a smart display than a smart speaker. Primarily because it has a display, giving Amazon Alexa or Google Assistant a nice visual aspect. For example, you can ask for the weather and actually see the weather, instead of just hearing about it.

Smart Displays are pretty awesome to use, as they can double as a secondary screen for watching content, as well as functioning as a photo frame. Not to mention the fact that they can also be used for Google Assistant or Amazon Alexa to do different things. But perhaps the best part is, using it as a hub for your smart home products. Google just debuted the new Nest Hub in March 2021, it comes in at the same price, and offers some pretty cool new features. Like the ability to actually sense when you’re sleeping. It can actually track your sleep, which might sound a bit surprising, but definitely cool.

Google also added Motion Sense to the Nest Hub, which appears to work a lot better than it did on the Pixel 4 series when that launched in 2019.

Otherwise, it still has a seven inch display, and a physical switch to turn off the microphone. Still no camera in this one, which is why it is so cheap. Google does offer the Nest Hub in a variety of colors too. Including Chalk, Charcoal, Mist and Sand. It’s currently available for pre-order. The Nest Hub Max is larger than the Nest Hub, hence the name. This one sports a 10.1-inch display, and also has a Nest Cam in the bezel. This camera can be used to keep an eye on your home when you’re not at home. It’s also used for video calling.

With the Nest Hub Max, you can use your smart home products on this display, including seeing who’s at the door, with your Nest Hello video doorbell. Or controlling your smart lights with your voice, or just using the display. Since there is a central hub available for controlling your home. It also can play all of your favorite music from YouTube Music among other services. The Amazon Echo Show 10 is a redesigned Echo Show, with a display that will now follow you around the room. This is useful for a few reasons. It’s great for video calls, as you’re able to stay in the frame all the time. But it’s also good for seeing what’s happening when you’re not home. Much like the Nest Hub Max, this camera can be used for security too.

The Echo Show 10 does have a really good speaker in it, and allows you to watch content from Amazon Prime Video, Netflix and other providers. As well as allowing you to watch what’s happening on your Ring Video Doorbell. With the Echo Show 8, you have the ability to use Alexa just like you would on a smart speaker. But since it has a display, you get some added visuals with it. This includes being able to actually see the weather when you ask about the weather. You can also do video calls, in addition to voice calls. Since, well it has a screen.

The Echo Show 8 can also bring up the security camera feeds from outside your home, or the video doorbell. Which is a really cool feature to have available. The Amazon Echo Show 5 can do pretty much everything that the Echo Show 8 can do, but in a smaller size. The Echo Show 5 is great to put in the kitchen or even in a bedroom on a nightstand in your room.

The display on the Echo Show 5 is a bit wider than the other Echo Show devices, which means it can show more content in-line versus the 8 or 10-inch models. The Lenovo Smart Clock Essential is actually smaller then the Echo Show 5, with a 4-inch display. But it also doesn’t have a full color display. It’s basically an LED clock with Google Assistant built-in. Which is really neat actually.

You can still listen to music on the Lenovo Smart Clock Essential and do all sorts of things with Google Assistant, but this is almost a non-display version of a smart display. Since you can’t watch your cameras on here, nor can you watch YouTube on it. This is another smart display from Lenovo which does look a lot like the first Echo Show ever made. It has the display at the top and a pretty beefy speaker at the bottom. This allows for some good sounding audio out of this speaker, and it actually fires at you, unlike the previous Lenovo smart displays.

It’s a 7-inch display, so this is mostly just a tall smart display, and not very large. But you can still do everything you’d expect on a Google Assistant smart display. That includes watching Netflix, seeing your Nest Cam security cameras, and so much more. You can check out all the commands you can use for Google Assistant here. The Echo Show 15 is, as you might expect, a 15-inch smart display that uses Amazon Alexa. it can be hung on the wall in your home, or you can buy the stand and place it elsewhere in your home. The stand is unfortunately not included in the box.

This is a really great smart display to pick up for a number of reasons, including the fact that it has a camera. Which can be used in your home security system and keep tabs on what’s happening in your home.