iPhones Is Not Expensive Than Android Phones, SEE WHY!

There are a lot of misconceptions when it comes to the iPhone vs. Android debate. One common myth that’s still prevalent is iPhones are more expensive than Android devices. This is simply not true at all.

The myth goes deeper than just price, too. People say iPhones are better because they’re more expensive. All Android devices are grouped together and looked down on as being “cheap.” Even Android users subscribe to this myth sometimes, refusing to pay for the “overpriced” iPhone. 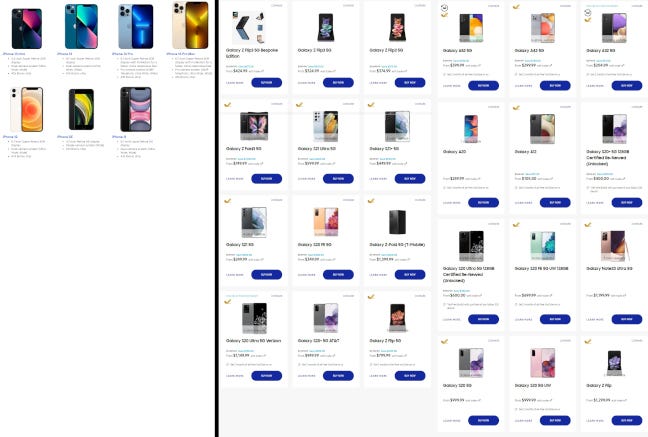 The comparison in price between iPhones and Android phones is fundamentally flawed. It’s very similar to the old Mac vs. PC debate. The ecosystems that they exist in couldn’t be more different.

Apple typically releases two or three new iPhones a year with one or two models being the “high-end” flagships. At the time of writing in early 2022, Apple offers eight iPhone models on its official website.

Let’s compare that to Samsung, Android’s closest equivalent to Apple. Samsung is offering over 30 Android phones for purchase on its official website. These devices range from super high-end to dirt cheap.

This is the major issue with the price argument. There are simply way more Android devices in the world than iPhones. It’s like taking the four or five best-looking apples and comparing them to the entire stack of oranges.

Let’s take a realistic look at the price differences between iPhones and Android phones. We’ll stick with the comparison that makes the most sense, iPhones vs. Samsung Galaxy phones.

Samsung’s top-of-the-line phone (that doesn’t have a foldable screen) is the Galaxy S21 Ultra. The base model costs $1,199 from Samsung. It has a 6.8-inch display, 128GB of storage, and four cameras on the back.

As you can see, both companies are offering high-end devices with very comparable features and similar pricing. The big difference is the iPhone 13 Pro Max can go up to 1TB of storage for $1,599, whereas the Galaxy S21 Ultra stops at 256GB for $1,249.

This is the case pretty much across the board. The best Android devices cost just as much as the best iPhones. Another example is the Google Pixel 6 Pro, which starts at $900 for 128GB. That’s $200 less than the base iPhone 13 Pro Max, but certainly isn’t “cheap.”

The truth is smartphones have settled into very similar pricing models. When one manufacturer raises prices, others see it as an opportunity to do the same. It’s more beneficial to them to keep the prices relatively even rather than fighting to get to the bottom line.

If you’re setting out to buy a solid, high-end smartphone, you’re going to pay a lot for it. It doesn’t matter if there’s an Apple on the back or not. In fact, the most expensive smartphones you can buy these days don’t come from Apple at all—they’re Android phones.

Vivo Y21A: Everything You Need to Know here

How WhatsApp Chat History Migration Between Android And iOS Works