NEW YORK (Reuters) – Elon Musk, Twitter’s new boss, doesn’t seem worried about an ultimatum that has led to the departure of hundreds of employees. “The best people stay,” Musk tweeted on Friday.

On the same day, Barstool Sports founder Dave Portnoy (Dave Portnoy) posted: “What do people mean when Twitter is shut down? Isn’t Twitter going to run automatically? I don’t know anything. Hey, Musk Want to hang out with me on Twitter? I don’t get it.”

In response, Musk replied: “The best people stay, so I’m not particularly concerned.” Twitter did not respond to a request for comment. 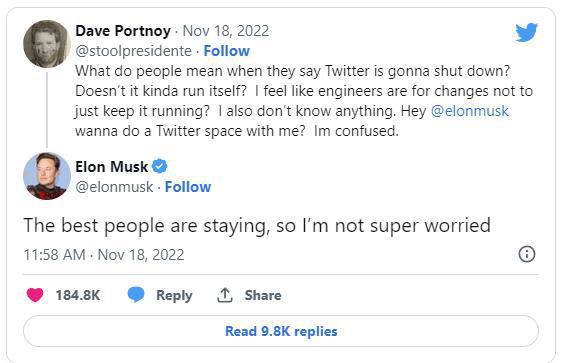 On Wednesday local time in the United States, Musk issued an ultimatum to Twitter employees, requiring them to make a decision before 5 pm on Thursday, either to sign a guarantee to help him build “Twitter 2.0”, or to receive three months of salary and leave.

Perhaps the most critical question now is how Twitter will stay afloat after laying off such a large number of employees in such a short period of time. The layoffs and voluntary resignations have spilled over to Twitter’s technical team, people familiar with the matter said. While Twitter remains afloat, former employees say serious problems can be harder for the company to fix when they arise.

Keeping a site like Twitter online often requires the full support of senior engineers who must constantly guard against cyberattacks and monitor network traffic to ensure servers are not overloaded. But problems can arise if too many older employees leave and Twitter doesn’t have enough professionals to monitor or fix problems quickly.

Musk and other company leaders even made calls to employees deemed critical to Twitter’s future to persuade them to stay at the company. But instead of asking for a raise, those asked to stay wanted Musk to clarify his “vision” for Twitter.

A resigned senior software engineer at Twitter tweeted late Thursday that the message the company shared with employees was that leadership has no vision and is expected to retain “blind loyalty” to Musk.

Musk went on to tweet a series of memes, joking that Twitter employees had left the company on Thursday night. One of the tweets included a photo of a grave with Twitter’s logo emblazoned on it. Another post featured an image that read, “Help us Ligma and Johnson, you are our only hope.”

The second tweet referred to pranksters named Rahul Ligma and Daniel Johnson. When Musk took over Twitter, they pretended to be employees fired by Twitter. Musk later took a group photo with the two and jokingly welcomed them back to the company.