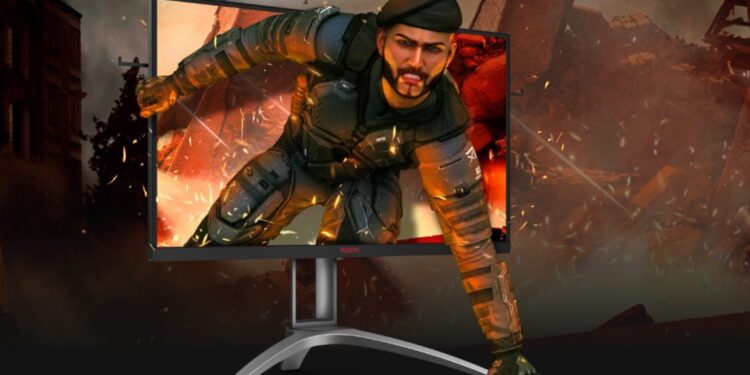 Costing at around £450, the AOC Agon AG273QX monitor is a 27-inch, QHD, FreeSync 2, VA panel with high speeds with a 165Hz refresh rate and about 1ms response time. This sounds like a recipe for victory, especially when it comes to speedy shooters and esports. But the question is, does it end on being a success in just games, or is there more to it?

Note, however, that this model is sadly not available in the USA still. It might well arrive there soon, but as for now, that’s an EU-only model. In America, the closest accessible AOC equivalent would apparently be the AOC C27G2.

Even though the stand and RGB lighting are quite the features themselves, there is one more design-related perk: a small plug-in hub. It’s a fine method to access menus and presets without messing with the screen’s controls. It’s fun in terms of user experience and it helps you avoid fiddling around with onboard buttons.

On the other hand, using the onboard controls is simple, and you’re able to change pre-sets by a little flick of the stick. The pre-sets are mostly great, too – they are applied very correctly to a variety of different games.

In addition to this, the AG273QX is claimed to have a DCI-P3 of around 90%, which is why the panel certainly needs to be included in the premium reaches of the range. Combine this with the good HDR 400 certification, and it really has everything to be considered a cool monitor for color.

The design of the monitor is a combination of elegance of the panel, as well as an extraordinary AOC-style design in the stand. The panel is placed in thin bezels and is quite sleek. And it’s got some delicious RGB lighting on the back in the form of a circle. You probably won’t be able to see it, but you’ll enjoy the glow against a wall, especially when you’re in low light.

I personally find the stand and legs a little too chunky, however. While it’s often amusing to have design statements, this one simply takes up too much space on the desk for my liking. So, this is a small warning for people with smaller desks.

Nevertheless, the panel can be adapted quite easily.

First, let’s see how the monitor functions in Apex Legends. Long story short, it’s a treat. The high speeds turn this first-person shooter into a truly exciting play thanks to its 165Hz refresh rate. The camera moves smoothly, and the gameplay is very enjoyable.

Metro Exodus is, unfortunately, a completely different story, as there’s a prominent bit of shine on the areas of grey and black colors of dark pictures. The contrasts aren’t really as good as the game requests, either. However, it all works just fine in some more well-lit places.

All in all, having carried out a close examination, I can say that I’ve seen somewhat sharper images. But what this monitor gives you in terms of clarity, mixed with some other characteristics, turns into a tremendous combination. The resulting picture is actually very good.

If you’re trying to find a fast 1440p monitor which is both high-quality and reliable, then this one is just right for you. Ultimately, it’s built for speed, which means esports-y games and shooters. If you have different game preferences, there are some better options for you.

The AG273QX suits best for Call of Duty players, and those who appreciate movement and pace over other characteristics. It also complements Nvidia graphics cards well.

Review of the Overwatch 2022