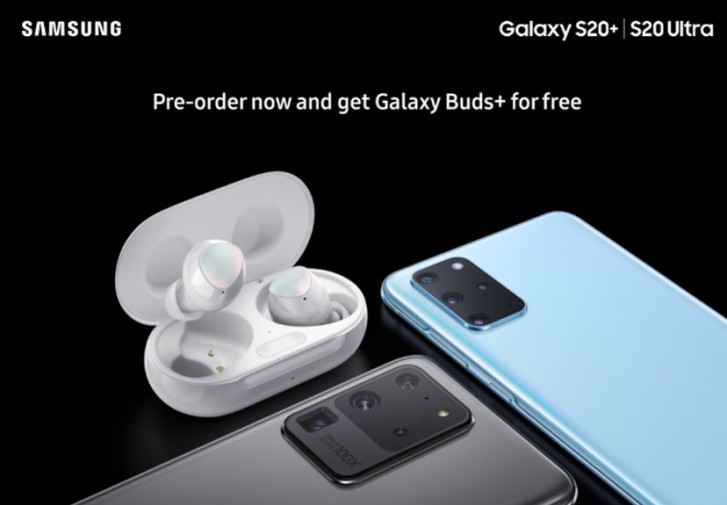 The Samsung Galaxy S20 series arriving on February 11 is said to be on pre-orders till March 13, and according to the latest information, those who pre-order the Galaxy S20+ and Galaxy S20 Ultra will get the as-of-yet-unofficial Galaxy Buds+ truly wireless earphones for free.

This information comes from reliable leakster Evan Blass, who shared a promo image for the pre-orders on Twitter. It includes the S20+, S20 Ultra and the Buds+, corroborating previous design leaks.

There’s no official word from Samsung about the Galaxy Buds+ yet, but we are likely to see them go official on February 11 alongside the S20 trio.

According to previous leaks, the Buds+ will retain the design of the Galaxy Buds and skip active noise cancellation. But, they will pack a bigger battery.

The South Korean giant and multinational conglomerate headquartered in Samsung Town, Seoul, comprises numerous affiliated businesses, most of them united under the Samsung brand, and is the largest South Korean chaebol. Samsung was founded by Lee Byung-chul in 1938 as a trading company.

The company’s big Unpacked event is just a week away and given the myriad of leaks we know most of the key specs of the upcoming Galaxy S20 family. A new leak however is spilling more details on the camera side as all three S20 phones will be able to take simultaneous shots and videos from their main, ultra-wide and telephoto shooters. According to XDA’s Max Weinbach, this feature will be called “Quick Take” and will let you let go into the gallery app after taking the triple shot and select which image you want to keep.

This won’t be the first time we’ve seen such as feature as LG’s “Triple Shot” which was present on the V40 back in 2018. More recently, iPhone users also got similar functionality albeit through a third-party app called DoubleTake.

Going back to the S20 rumors, Samsung is also expected to bring another camera feature called “Single Take” which compiles images captured from the three camera modules into short videos. The S20 lineup is shaping up to be a big leap in camera hardware and software so we’re definitely looking forward to next Tuesday’s big event. Learn more