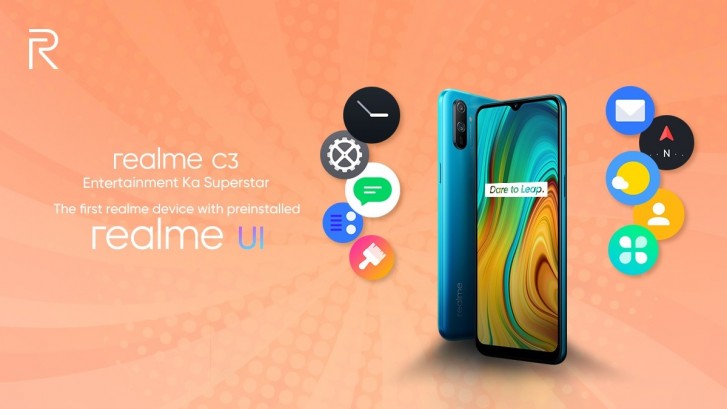 Realme is a Chinese smartphone manufacturer and also produces a wide variety of other products such as earphones, fitness bands and bags. The company’s upcoming Realme C3 is coming on February 6 but the company has already revealed most of its specifications. Now, Realme has announced that Realme C3 will boot Realme UI, making it the first Realme smartphone to run the company’s newest Android 10-based skin out of the box.

Infinix Note 7 vs Realme C3: Which is the better gaming…

Realme C3 to get a triple Camera

The Realme C3 is an entry-level smartphone, having the recently announced Helio G70 SoC at the helm. It will arrive in two memory configurations (3GB/32GB and 4GB/64GB) and sport a 6.5″ waterdrop notch display, having a screen-to-body ratio of 89.8%.

For photography, the Realme C3 will come with three cameras – one on the front and two at the back. The primary camera will have a 12MP sensor, but we don’t have details about the rest of the snappers.

The Realme C3 will pack a 5,000 mAh battery, which will likely draw power through a microUSB port. Realme has already confirmed the Blue color for the C3, but there will likely be more color options that aren’t confirmed yet.