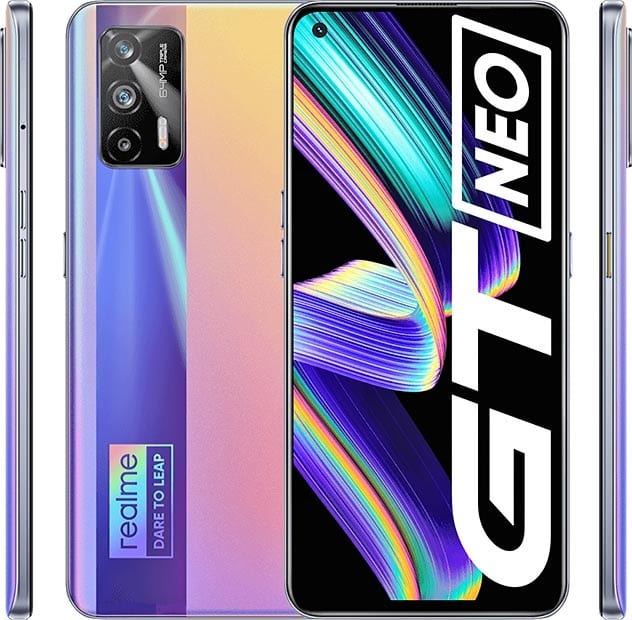 We pretty much have the same system going with the design on both smartphones. Their rear and front placements are basically the same. However, they have colour options that set them apart from each other.

Speaking on colour first, we have three, we have three colour variants here that include Black, Silver, and Aurora, as opposed to Gold / Black, Blue, and Silver on the regular GT.

Also on the rear, is the Realme branding and the square camera module bearing three cameras and an LED flash.

Flipping this Android smartphone to get a front view reveals a 6.43-inch Super AMOLED display with a punch-hole camera on the top left corner of the display. The highlights of this display include a resolution of 1080p@30fps, a density of 409 PPI, and a 90Hz refresh rate, which pretty much sums up the package on the former.

The Realme GT Neo’s camera setup also falls in the reminiscence space, bearing the same cameras as seen on the Regular GT.

On the software side, we have the Realme UI 2.0 user interface running on the Android 11 operating system.

Internet connectivity is capped at 5G, which means enthusiasts can utilize 5G connectivity for streaming, downloads, and uploads.

The Realme GT Neo was announced on March 31st and was released for purchase on April 8th 2021.

Here are a few specs of the Realme GT Neo: