The highly anticipated clamshell Samsung Galaxy Z Flip has made its way to China’s 3C certification database, revealing it’s coming with a 15W charger in the box. The device from this certification bears the SM-F700 model number which matches previous certification exploits.

It’s important to note that the Galaxy Z Flip will not feature the latest and greatest internal components. The device is believed to ship with last year’s Snapdragon 855 at the helm alongside a dual-camera setup on the outside and a 10MP selfie cam.

The more interesting bit, however, is the display which will allegedly feature an Ultra-Thin Glass (UTG) construction, making it the first device on the market to do so. That’s pretty much all we know at this point.

There’s also the rumors about the pricing which are centered around a $1,000 price tag but we’ll just have to wait and see if that holds up. Samsung is hosting its Unpacked event on February 11 where we’ll see the reveals of the new S20 lineup as well as the Galaxy Z Flip. 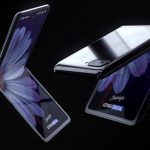