According to foreign media reports, on August 7th, Beijing time, SpaceX is preparing for the third attempt to implement the tenth “Starlink” launch mission. The second time was in July.

At the same time, SpaceX has completed many tasks, including the launch of GPS satellites into space again, and the “Dragon” spacecraft carrying astronauts Bob Benken and Doug Hurley from the International Space Station back to Earth. 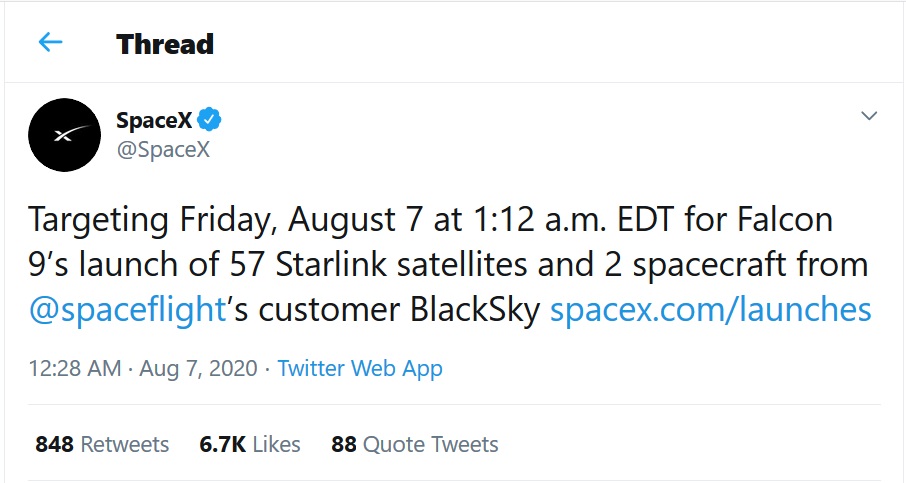 Elon Musk become the third richest in the world, revealed…

The total value of Tesla + SpaceX is more than 500 billion…

The payload of this mission includes Starlink satellites, a total of 57. These satellites will join other satellite groups that have entered low-Earth orbit. SpaceX is preparing to start testing of satellite functions this summer.

The goal of the Starlink project is to provide such broadband services to customers who are currently unable to smoothly access low-latency, high-speed broadband. It will begin testing in parts of the United States and Canada this year.

The Starlink satellites in this “flight” are all equipped with a special retractable solar sun visor, because the radio surface on the satellite will reflect light. If the sun visor is not equipped, the satellite will look particularly abrupt in the black night sky at night.

The mission also carried two BlackSky satellites. They were one of the customers that SpaceX acquired through the launch service provider Spaceflight. This is the second time that SpaceX has arranged another payload on the same “flight” with its own Starlink satellite, thus demonstrating its “shared space” business model.