The release of the Tecno Pova 2 sort of eliminates what might have been a doubt that Tecno would continue the Pova series. This new smartphone bears a package that sets it on a pedestal higher than the placing of the first-generation Tecno Pova. Onboard the Pova 2, we have a more capable processor, a bigger battery, and lots more. 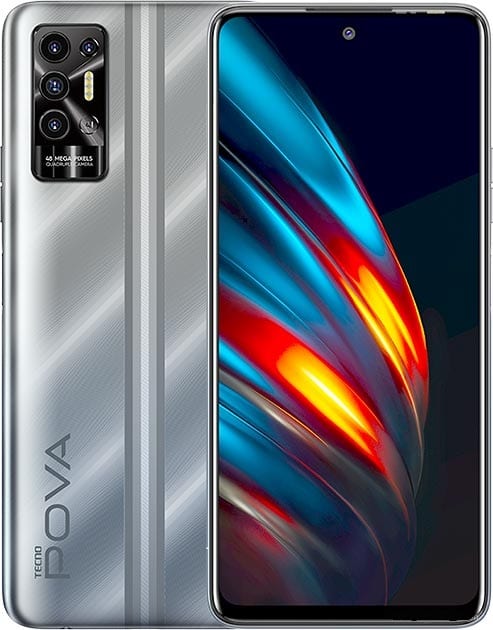 The Tecno Pova 2’s design was somehow carved out from the design we had on the former. Looking closely, you will discover we have a similar design language. However, there are some differences in placements that facilitate a disparity.

Kicking things off with the design on the rear, we have a strip of three lines running from top to bottom of the center position, which is pretty much the most pronounced thing on the rear design.

A subtle gradient design is another thing you will discover about the rear design on this device. On this gradient design, you will find a square camera module containing four cameras and an LED flash. Also on the rear, is the Tecno and Pova branding, which sort of indicates the OEM.

Moving up front, we discover a slightly bigger 6.9-inch IPS LCD display which is by 0.1-inch bigger than the display on the first-gen Pova. What’s more, the punch hole camera was moved from the top right corner to the center position on the Pova 2.

Taking the on-paper specs of Tecno Pova 2’s cameras shows the primary camera on the rear has pixels bigger than what we had on the first-gen Tecno Pova smartphone.

On the rear, we have a 48MP primary camera with an aperture of f/1.9, as opposed to the 13MP camera on its predecessor. The other cameras on the rear include a 2MP depth camera and a 2MP macro camera and another 2MP secondary camera. Video record on this setup is capped at 1440p @ 30fps.

Upfront, we have a single 8MP pixel camera which is similar to what we had on the former. This camera is capable of shooting videos up to 1080p @ 30fps.

On the performance side, the Tecno Pova 2 rocks an Octa-core MediaTek Helio G85 processor as its chief facilitator, as opposed to the Helio G80 processor on the first-gen Tecno Pova.

The other facilitators include a Mali-G52 MC2 GPU, a whopping 7000mAh battery, as opposed to the 6000mAh battery on its predecessor. The storage and RAM variants available on this device include 64GB 4GB RAM and 128GB 6GB RAM.

On the software side, we have the HiOS 7.6 user interface on top of the Android 11 operating system.

5G connectivity seems to still be far from the stables of Tecno, as such, internet connectivity is capped at 4G.

Here are a few specs of the Tecno Pova 2: