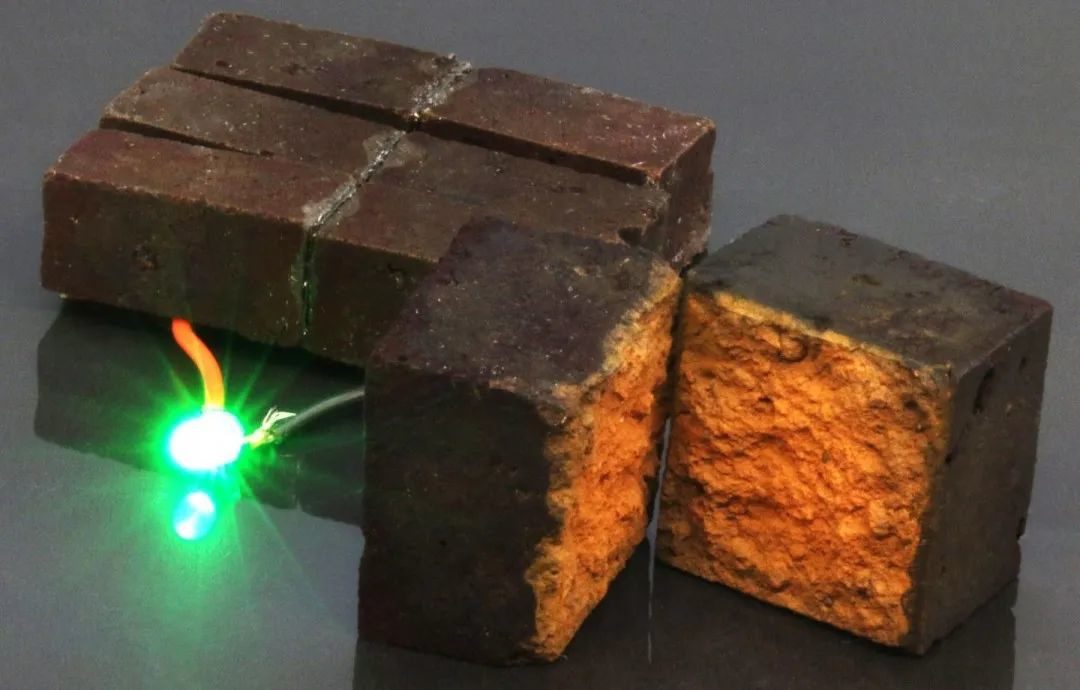 This brick can light up LED lights

The brick becomes a “power bank”? 3 bricks to keep the LED light on for 10 minutes. You read that right, this brick can light up the LED lights.

It is this kind of ordinary red brick that is very inconspicuous, which can be bought for less than a dollar. Maybe it can become a “power bank” in the future?

Recently, the D’Arcy Laboratory of Washington University in St. Louis published a new study that found that bricks, the most basic building material, can even store electricity.

The reconstructed red brick can be connected to the power supply to recharge 10,000 times, and after a single charge, three 4×3×1 cm bricks can power the green LED lights for about 10 minutes (as shown in the figure above). Although it seems that the amount of electricity stored by bricks is negligible, the addition of more metal oxides in the future will greatly improve its electricity storage performance, which may bring inspiration to the design of energy storage building materials.

The research was published in the journal Nature Communications.

Rust can also be used to store energy

Julio D’arcy, assistant professor of chemistry at Washington University in St. Louis and the corresponding author of the paper, said, “We have created a new type of brick that can be built in your house with the function of storing electricity.” He added: “We think , It is not difficult to realize sensor application on these bricks.”

For many years, D’arcy and his colleagues have been experimenting with rust, which is a ubiquitous red film, mainly composed of molten particles of silica (SiO2), alumina (Al2O3) and hematite (α-Fe2O3)2 composition. It will form on any structure that contains iron.

Rust is generally considered a harmful corrosive substance, but D’arcy’s team has shown that rusty iron oxide has useful properties for materials science.

D’arcy explained: “If you treat rust chemically, it will actually react.” “So, what we usually think of as waste is actually a useful chemical substance that can be used to produce energy storage materials. “

The pigment part of the red brick comes from rust, which prompted researchers to further study the structural characteristics of the bricks to see if they can be transformed into a kind of energy storage device called “supercapacitor”.

Researchers have big brains, hoping to “purify water” with bricks

In addition to improving conductivity and storage capacity, the researchers of this project also hope to prove that air sensors or water purification systems can be integrated into the bricks.

In other words, the researchers hope that when the water flows down the roof and through the bricks, it can be purified and then collected. D’arcy guessed, “We always think about purifying water with a filter. But what if the house is a filter?”

This is still a kind of imagination, far from being realized. However, recently D’arcy and his colleagues are focusing on improving the power generation efficiency of these bricks so that they can be used as backup power sources for ordinary households, such as emergency lighting systems.

D’arcy said: “If we can increase the amount of energy a brick can store, we can expand the scale and use fewer bricks.”

How to store energy on the surface of ordinary bricks

So, how is it possible to store energy on the surface of ordinary bricks?

The open microstructure, mechanical robustness and ~ 8wt% α-Fe2O3 content of the fired bricks provide an ideal base for the development of electrochemical PEDOT electrodes and fixed supercapacitors that can be stacked into modules at any time. The researchers used the porous structure of the red bricks, used acid vapor to dissolve the iron oxides inside the red bricks, and added a layer of fiber mesh composed of PEDOT (a conductive polymer) to the whole brick.

Using epoxy resin as a waterproof shell to make the supercapacitor run underwater, the gel electrolyte can increase the cycle stability to 10,000 cycles and the capacitance retention rate is as high as 90%.

The above demonstrates how to store energy on the surface of ordinary bricks, use α-Fe2O3 as an oxidant precursor to control oxidative radical polymerization, and conformally deposit capacitive nanofiber PEDOT coating from the gas phase. The structural stability and open microstructure of the brick make the brick electrodes have strong mechanical properties. When connected together and coated with epoxy resin, it can produce a stable fixed waterproof supercapacitor module.

This supercapacitor technology can add value to this “very cheap” building material and demonstrate a scalable process to provide energy storage for embedded micro-devices that use bricks in building applications.

Julio D’Arcy is an assistant professor of chemistry at Washington University in St. Louis. He received a Ph.D. in chemistry from the University of California, Los Angeles. His areas of expertise are conjugated polymers, electrochemistry and thin-film composite devices, and he is particularly interested in energy applications.

Entanglement itself does not entangle light