The PES 2021 PPSSPP is a must-have Android PPSSPP game for sport and football lovers The game is one of the best and it’s currently installed on my own Android phone. The PES 2021 is a football game and you can now install it on your device. 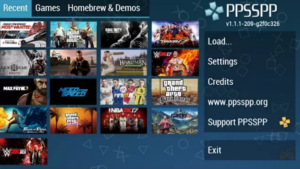 Call of Duty Roads To Victory PSP is an amazing game that brings necessary weapons and given a mission to complete. The game has a multiplayer feature which allows you to play it with your friends and family and also some goodies as well.

The PES is another football game that gives you real-life experience of football matches and training. The game features a favorite player who moved to a new club in a new world with a new stadium and kits.

The Tekken 5 PPSSPP is very popular among gamers. The game is about a storyline which makes it more fascinating and interesting to play. Each fight has its special move and skills that you will learn.

This is one of the best PPSSPP games you will ever get. The game is about series of dragon ball movie that was originally developed for PlayStations but now available for Android users as well. The game has high graphics.

The Lord Of Arcana PSP is available for Android users and it comes with 3D graphics. In the game, you will have to fight many enemies to survive.

This is a PSP action where you will have to control the main character which is john slate to execute his mission and rescue the victim. You will face many challenges in the game.

This is also another popular fighting PSP game that involved action and competition. The game features quality graphics and nice game control.

This is an adventure PSP game where the player has to explore the city and face many challenges. You will also get a reward after you have completed a mission. The game tells a storyline based on Vice City Stories.

The Spider-Man 2 is an amazing game that comes in PPSSPP. This is one of the addictive games that you need to try.

The God of War is popular to the point that it has over 5 million downloads. The game is about a player who takes the role of Kratos and plays through the storyline of Greek mythology. You will encounter many obstacles as you travel through the land.

Spider-Man 3 is part of the series game that contains much combat and swinging across the city. The 1.4GB is not that much. However, before downloading it, make sure you have enough inbuilt memory.

Sonic Rivals 2 is a nice game created by backbone entertainment. It contains 3 characters with 12 stages of play. You can enjoy the game through an emulator and it has 164MB in size.

This is another series of God of War that comes in the PPSSPP file. The game features kratos as the main character and you will combat double-edge swords killing your enemies. It has a size of 1.4GB, password – apk69.com

This is described as one of the best world’s greatest action franchise games and it’s available for mobile phones like Android OS. You as the player will become the most feared pirates of the Caribbean in this exclusive Assassin’s Creed adventure! You will be Alonzo Batilla, a young and ambitious pirate captain, and you can break rules challenge and get many golds.

The WWE SmackDown VS Raw 2011 was first released for the PSP console. The good thing is that they comes with unlock players superstars in WWE 2011 storyline. It may be old but worth playing.

The X-men Origin was created after the release of the Wolverine movie. So it has a movie storyline and it’s about the wolverine who fought for justice and survival. The game size is 404MB.

Here the player will play the character of Beowulf, a strong warrior who has the strength of 29 men combined together. You will have a long journey ahead of you and fight for glory and gold.

I describe this game as the best Android racing game that many enjoy playing. You have many and supercar under your care to race and win many prizes.

This is the upgraded version of the WWE smackdown. It comes with better graphics and skills. The good news is that new superstars have been added and you can play popular Events such as Royal Rumble, wrestle mania.

The Ghost Rider focuses on a real-life movie of Ghost Rider. It has the same storyline as the movie and it contain 652MB in size.

Here is another game that tells the story of an adventurer in a city. In this game, you are the main character and you have many missions with the aim of completing each task. You will live the life of a gangster, travel from city to city, and many more. The game size is 555MB.

This is an amazing game that requires peculiar skills and a style of fighting. You can give the game a try by downloading it as it requires a size of 916MB. Password – apk69.com.

Soul Calibur is a nice PPSSPP game that you can try. The game size is 375MB but doesn’t expect much on the graphics.

Tekken is just like mortal combat and a new character has been added to make it great and nice to play. You will fight your favorite fighter and use new skills to win your opponent. It also has a multiplayer feature.

The FIFA 14 is a great football game to play. This version here is for the PPSSPP emulator and it has nice graphics that make everything nice and easy to play.

The game is about a story of a lady traveling around the world in search of a legendary ancient artifact. It has high graphics with a size of 1.95GB.

More PPSSPP Games From A – Z to Download For Android